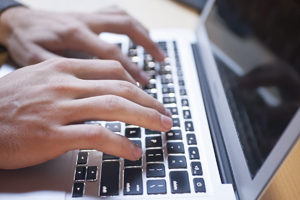 Hello, and welcome to another tip-of-the-week! This week, we’re going to discuss advantages and disadvantages of switching your computer’s keyboard layout for typing in a foreign language.

When translating documents into a language that differs from that in which your computer was originally formatted, it may be beneficial or necessary to adjust your functional keyboard layout to one used in the region where your language is spoken. Sometimes, you will find that the keyboard layout does not vary significantly, even when typing in a different language. This is largely because the QWERTY format is in widespread use, particularly for those computers whose primary language employs the Latin script (although keyboards with other characters often include Latin symbols as well). But what about those keyboards whose layouts are quite distinct?

The primary disadvantage of switching is evident: the physical letters stamped onto each key may not match the letter you type. Therefore, when typing with a functional keyboard that differs from the visual, it is almost easier not to look at the keys, as even a temporary confusion could throw off your typing rhythm. Furthermore, if this is not the keyboard you are accustomed to using (even if you are familiar with it), you run the risk of making avoidable mistakes, which, though most likely easy to catch, could be time-consuming to fix.

On the other hand, it may be advantageous to use a different keyboard layout, because it would most likely be better suited to the language in which you are writing. The Spanish keyboard, for example, includes the letter”ñ”; while this is not a common letter in the English language and thus unnecessary to include in the English QWERTY format, it occurs with frequency in Spanish. Therefore, it makes sense that the Spanish keyboard requires just one tap to produce this letter in place of two or more. Furthermore, since languages such as French and Spanish require many more diacritical marks than English, it is logical that the corresponding keyboards facilitate their use.

Time is of the essence when translating documents, of course, and any change that speeds up the process is highly beneficial. You want to avoid any adjustment that slows down your progress. Therefore, choosing to switch your computer’s functional keyboard layout ultimately depends on your familiarity with the target keyboard, with your ability to disconnect the visual from the functional, and the number of additional symbols that your current keyboard does not support or include. For information on how to switch your computer’s functional keyboard layout, click here (Windows) or here (Mac).

Do you use a different keyboard layout when typing in a different language? Why or why not? We would love to read your thoughts in the comments!