Muslims are in the midst of the holy month of Ramadan; which commenced on June 5th and will conclude on July 5th. Although renowned for its focus on prayer and fasting, two of the five pillars of the Islamic faith, food plays a vital role in the practice of Ramadan as well. 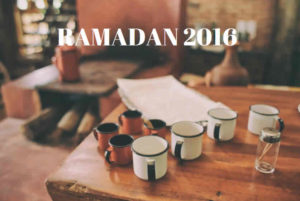 In regards to the prime characteristics of Ramadan, it is the ninth month of the Islamic calendar and is celebrated as the time in which Prophet Muhammad, peace be upon him, received the initial revelations from the Angel Gabriel that eventually became the Quran. Due to the fact that the Islamic calendar is lunar, Ramadan does not start on the same date each year. Muslims stick to their normal routines during Ramadan with a few exceptions. Throughout Ramadan, Muslims are expected to fast from dawn to dusk each day, abstaining from eating, drinking, smoking, and immoral behavior. The only Muslims who are not expected to fast are those who are sick, pregnant, or elderly. Furthermore, a number of Muslims also read the entire Quran and attend mosques on a more frequent basis. It is a time of self-reflection and the remembrance of God. Charity, one of the other pillars of Islam, is also commonly practiced throughout Ramadan, especially by those who are unable to fast.

Despite the importance of fasting, food plays a major role in Ramadan. It is important for Muslims to maintain a well-balanced diet, eating foods such as fruits, vegetables, proteins, and fibers that will sustain them throughout the entirety of each day. The pre-dawn meal of the day during Ramadan is called السحور (suhoor) while the post-dusk meal is called الإفطار (iftar). Both meals are incredibly elaborate and diverse, often celebrated with family and friends. There are a wide variety of dishes that find their way onto the plates of Muslims at السحور and الإفطار. Rice pudding with dates is a fairly common dish. Dahi vadey, lentil dumplings paired with a yogurt sauce, are eaten throughout India during Ramadan. One of my favorite dishes, حريرة (harira), a light, tomato-based soup, is consumed in Morocco. كنافة (konafah), a doughy pastry filled with cheese, is a popular choice among many Arab countries as well.

Hence, Ramadan is a time surrounded by fasting, prayer, self-reflection- and some delicious flavors. To all of my Muslim friends, eat up when you can and may God accept your fasting. .تقبل الله صيامكم

What are some of your favorite foods that you or your friends consume during Ramadan? Comment below!

Article: What Lunch Looks Like for People Around the World

Article: The status of social media across the globe