National Day Celebrations around the Globe

This coming Monday is a favorite holiday for many Americans, the 4th of July, the date in which the Continental Congress formally adopted Thomas Jefferson’s Declaration of Independence in the year 1776. Today, thoughts of American flags, picnics, fireworks, hotdogs, and apple pies come to mind when one thinks of Independence Day in the United States. However, these are not necessarily the images that come to mind for celebrations around the globe. 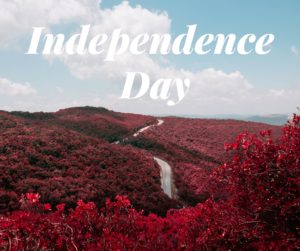 Argentina earned its independence from Spain on July 9th, 1816 and honors the national holiday on July 9th of each year. In modern day celebrations, food plays a major role. Locro, a soup made with corn, pumpkin, beans, and meat, is traditionally served on this day. For dessert, one can expect pastelitos (pastries stuffed with jam) and churros accompanied by hot chocolate. Besides the food, there are many other aspects of Independence Day in Argentina. There are lots of festivities, specifically in Buenos Aires, Argentina’s capital. Thousands of people gather there each year for parades and fireworks.

Qatar National Day is celebrated on December 18th of each year, the date in 1878 in which Sheikh Jassim bin Mohammed Al Thani succeeded his father and led the country towards unification. Last year, I had the unique opportunity to honor the occasion in Washington D.C. with the Qatar Embassy. The celebrations are highlighted by a massive parade through the streets of Doha, the nation’s capital, and a fireworks display. In 2015, there were also air shows and other demonstrations, along with cultural festivals. Although I was not subject to these elaborate events in D.C., I was able to sample some traditional Qatari cuisine. Machboos, a spiced rice dish with meat, is a popular National Day meal. For dessert, mahalabiya, a pudding made from rice milk, is the norm. Both dishes are scrumptious.

Switzerland’s National Day occurs on August 1st of each year, inspired by the date of the Federal Charter of 1291 that formed a confederation in what is modern-day Switzerland. Every community in Switzerland celebrates the annual holiday with bonfires and fireworks. Paper lanterns and cultural festivals are also present in most communities on this day. However, there have been many other unique practices adopted by the Swiss in order to celebrate. Farmer’s brunches have gained a lot of popularity. If one buys a ticket to this event, the gain an all-you-can-eat experience with local and organic foods such as sausage, pies, eggs, etc. and entertainment. Another unique tradition is Schwingen Tournaments, a Swiss version of wrestling where people battle while holding onto each other’s pants and belts. The match is held in a dusty ring, and the winner of each match brushes the dust off of the loser’s back as a token of good sportsmanship.

How do you and your family celebrate your respective National Day? What traditions do you practice that make your National Day special? Comment below!

Article: What Lunch Looks Like for People Around the World

Article: The status of social media across the globe

4 responses to “National Day Celebrations around the Globe”