It happens to everyone and it’s unavoidable. We’ve all felt out of place at one time or another. No matter if you’re taking a vacation to an unfamiliar city and have to ask directions in order to find your way or if you feel 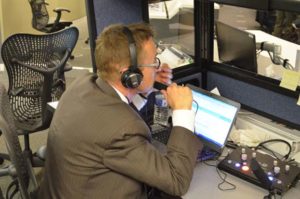 uncomfortable after agreeing to an afternoon out with a friend who invited several others without asking you first, these kinds of situations happen all the time.

Interpreters, too, have to find ways of coping with unfamiliar and uncomfortable situations, regardless of what their script may say, since no script will be able to take such situations into account. Speakers or presenters do not always follow their written script, and this can be jarring for the interpreter if he or she is not prepared for that eventuality. Humor is an even more challenging situation. How does an interpreter convey humor during a presentation if a script was not provided beforehand? Humor involves cultural references and linguistic plays on words, and can be difficult to translate on paper, never mind during a simultaneous interpretation assignment.

Simultaneous interpreters need to be prepared to cope with a variety of situations, and one kind of situation involves humor during a presentation. Whether or not the humor is planned, the speaker’s intention is to relax the audience and to build his or her confidence as a presenter. Since humor is often spontaneous, especially during otherwise serious business meetings (a presenter tells a quick and funny story about something which happened just before entering the conference room; for example), an interpreter should give more attention to the audience receiving the humor than the speaker telling the joke. By understanding her audience’s culture, the interpreter is able to find a quick and equivalent bit of humor which fits well within their cultural and linguistic frameworks. Interpreters should therefore familiarize themselves with short and familiar pieces of humor common to the languages and countries they interpret for. This way, they will never find themselves at a loss of what to say when confronted with what could otherwise be an uncomfortable or unfamiliar situation. Since the humor’s main goal is to relax the audience and make them laugh, the joke doesn’t matter. It is more important for the humor to be culturally and linguistically relevant to the audience, and familiarity works best in most cases. The interpreter has a tremendous advantage, since he does not have to spend a lot of time finding clever ways to change existing humor. Finding equivalent humor should do the trick rather nicely. Because of the nature of most presentations, the audience expects a short humorous story that is relatable. They do not expect a ten minute stand up routine.

Interpreters should be relaxed about potential uncomfortable or unfamiliar situations that may come up during an interpretation assignment. If the presenter and interpreter are relaxed, the audience will be relaxed.

Interpreters: What would you do in this kind of situation? Audience members: Do you feel like you’re missing out on something important if the interpretation is different from the original?