The fact that Italians talk with their hands is generally accepted as a stereotype, a joke, and the truth. Far from simply being an outlet for feelings and emotions, however, the movement of an Italian’s hands can convey depth and inflection that words just don’t cover. Gesticulation is something that is passed down through generations, just like spoken or signed language, and occasionally is added to or changed. Some even joke that gesturing starts before birth, viewing the movements of a fetus’s hands in an ultrasound as intentional.

While such movements are not classified as a complete language — since they lack a complete syntax — they still convey meaning to people in a conversation. An Italian professor of psychology at the Roma Tre University 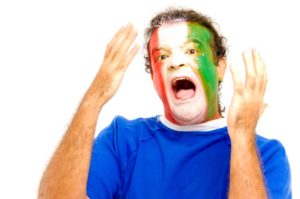 has identified over 250 gestures that are used in everyday conversation, from expressing a threat or a desire, to admitting shame or pride. When asked why they do it, Italians reason that they grew up with it as a natural part of conversation, and some things just “shouldn’t be expressed with words.”

It has, occasionally, been the cause for legal recourse, such as when one man accidentally hit an 80 year old woman while conversing outdoors. Italy’s highest court ruled that he was liable for damages, since his gesticulation was deemed too rigorous for public areas. Yet in 2008, when the founder of the conservative Northern League raised his middle finger during the singing of Italy’s national anthem, a court in Venice decided that, while obscene and outrageous, it was not, technically, illegal to do so.

Various myths and theories abound as to why Italians use their hands while talking, from hidden communication during occupation from the 14th to 19th centuries to a form of marking one’s territory in a crowded

cityscape. Comparisons have even been noted between gestures painted on ancient Greek vases and those still in use today.

All in all, Italians often seem to say as much with their gestures as they do with their words. Since much communication takes place without words anyway, from a simple nod or smile to a myriad of hand gestures, Italians may be particularly adept at communicating with one another unobtrusively.