Most of us remember the feeling of acting in a school play. You practiced for hours until you memorized your lines flawlessly. You were confident and sure of yourself. Then, it’s opening night. You stand up on stage, under the hot lights and in front of the crowd who is completely focused on you, and you can’t remember what you’re supposed to say. Your mind goes blank, and all the lines you so carefully memorized disappear in an instant.

Although you are not the sole focus of the audience’s attention as a simultaneous interpreter, you are still an actor of sorts. You are responsible for transmitting both culture and language, although you may or may not be 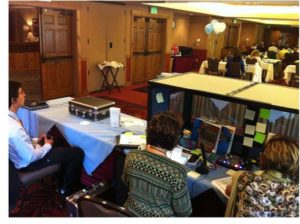 working from a script. While you may have had some preparation for this moment, you do not have any time to pause and think of just the right word. Your performance reflects upon the original speaker, because you are his or her voice to those listening to your interpretation. So what do you do when the speaker says something you don’t understand, don’t catch, or aren’t sure how to interpret?

A presentation’s flow is one of its most important aspects, so you should take your cues from the speaker. Therefore, if the original speaker doesn’t pause, neither should you. You must keep pace, no matter what may happen. You would ideally be familiar with every single term someone could possibly think up and would be able to use the equivalent expression without hesitation, one hundred percent of the time. Because this is real life, though, speakers use words and expressions unfamiliar to others all of the time and listeners must often adapt to such circumstances. For People speaking the same language, context gives a hint about what was implied by the speaker’s words, since topics are usually related to one another. As an interpreter, you could simply rephrase what was said in a slightly different way, assuming you had no idea what the presenter said. If you heard the speaker’s words, but were unsure how to render them in the other language, it’s usually best to quickly and confidently talk around the unfamiliar expression while conveying as much of its essence as possible. In an absolutely unavoidable situation, you could admit to your audience that you didn’t understand exactly what was said and could ask the speaker to repeat his or her last few words. This should be avoided whenever possible, however, as it may cause you to appear careless and inattentive.

No matter how prepared you may be for your assignment, unexpected words or phrases may be used, and you should be prepared to confidently and quickly convey the essence if the exact meaning is unknown. Sufficient preparation for the presentation can help avoid any unnecessary nerves on your part and help deliver an interpretation that accurately reflects the original speaker’s intent.

5 responses to “Simultaneous Interpretation Series Part 4 of 6: Stage Fright, or Forgetting Your Lines”