Simultaneous interpretation is demanding. It is doubtlessly one of the most difficult language skills to learn. Just because someone is fluent in two languages does not mean that person will be able to render the nuances 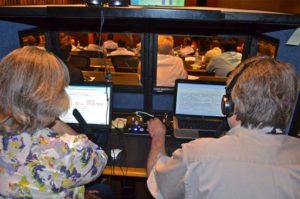 correctly in such a fast-paced environment. Simultaneous interpretation doesn’t allow time to search through a dictionary for unfamiliar expressions, and gives no chance to consider how to best reinterpret unknown words or phrases. The interpreter must therefore be confident in thinking and speaking on the fly. Being able to quickly improvise is an essential skill. It is also extremely important that the interpreter is completely comfortable living and working within both cultures and able to convey the nuances of each of them in word, tone, and expression. In other words, it is not enough for them to merely restate a foreign language equivalent; they must assume the role of an actor who is able to convey the speaker’s words perfectly. Since body language differs among cultures, the interpreter must also be comfortable in conveying physical gestures and interpreting these gestures to communicate the same meaning to his or her audience.

Simultaneous interpretation may be challenging, but it isn’t impossible. For people with the right language skills and cultural background, simultaneous interpretation can be both personally and financially rewarding. The interpreter is exposed to a great variety of situations, people, and materials, and has an opportunity to help bridge gaps in communication and spread ideas.

Do you currently work as a simultaneous interpreter? What advice would you offer a newcomer to the profession?